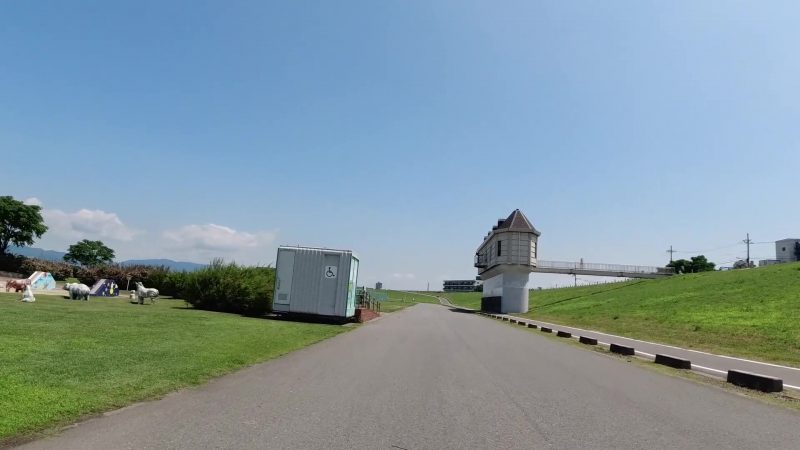 Many people have a impression that it’s a long way from Osaka to Kyoto.

I usually ride my bicycle from Osaka to Kyoto and enjoy

There are bike paths along the Yodo and Katsura rivers, and you can ride from Osaka to Arashiyama in Kyoto.

There are also many train lines, so you can enjoy cyclingeven if you’re a beginner.

The Yodo River is an important river in Osaka, flowing from Lake Biwa, it has been renamed the Seta River, the Uji River, and the Yodo River, and is a first-class river that flows into Osaka Bay.

People generally think of the Yodo River as stretching from the vicinity of Yawata City in Kyoto to Osaka Bay, and the Yodogawa Bicycle Path has been developed along the Yodogawa River with this image.

It’s not maintained up to Osaka Bay, and there are some unmaintained sections in some places, but it’s a good bike path from the Miyakojima ward area to the north.

Except for this one.

The Yodogawa bike path has a path on the embankment, but the road is wide and easy to ride because you can ride on the riverbed.

However, there are many annoying things on this road.

It has many barriers to prevent motorbikes from getting into the road.

Especially from Osaka city to Hirakata area, there are so many of them that it’s disgusting, and they put a damper on comfortable cycling.

It seems that there are 24 of them, as some people have actually counted them!

There are no traffic lights, and so there are no pressure from cars, so you can ride comfortably.

Near the end of the Yodogawa Cycling Road is the Yodogawa River Park Sowari Tsutsumi area, famous for its Iwashimizu Hachimangu Shrine and cherry blossoms, so it’s fun to enjoy a bit of sightseeing along the road!

Lots of toilets on the way

The banks of the Yodogawa River are also parks and there are many temporary toilets along the way.

Basically run on the left bank

There are bike paths on both sides of the Yodogawa river, but the bike path on the left bank leads to the Katsura river bike path.

If you want to ride on the right bank, you should move to the left bank before Hirakata Ohashi.

In addition, the left bank is on the left side of a river flow and becomes the east side.

You can take the Katsuragawa Bicycle Path to Arashiyama

You can get to Kyoto or Nara from Osaka on the Yodo Katsura or Kizu River bike path.